Natron OL Doinyo Lengai: the Mountain of God. Ol Doinyo Lengai is around 2900 metres above sea-level, is located some 240 kilometres to the northwest of Arusha town, along the western escarpment of the Great Rift Valley, overlooking Lake Natron on the border with Kenya. Ol Doinyo Lengai, or Mountain of God in Maasai, is the only active volcano in Tanzania. It’s the sacred mountain of the Masai, The local Masai respect it as holy Mountain of God and home to their God Ngai, geologists’ study the mountain for its unique lava and travelers attempt to capture it on photographs, Black Rhino tours and travels invites you to do the same, Allow us to take you to the mountain of God. Now and then, the imposing giant starts to grumble, in 2017 it sent tremors across the lands all the way to Kenya However, there were clear signs such as earthquakes and increased ash emissions which suggested that the Masai’s God Ngai, living on the volcano, is not content and might vent her anger in a volcanic eruption. The mountain can be climbed in 6 hours, affording breathtaking views of the Great Rift Valley and volcanic formations in the Ngorongoro highlands as you get to the summit. It is an adventurous hike starting at dawn. Remember this is an active volcano, the mountain remains closed for climbing when we have eruptions. Lying on the base of the mountain, Lake Natron is said to be the only breeding area for the endangered Lesser Flamingoes that live in the Great Rift Valley and it is believed to be the world’s most important breeding site for the Lesser Flamingoes, accounting for 75 per cent of the global population.The area around Lake Natron is often described as having a desolate and almost lunar landscape beauty. Walks around the lake and to the streams and waterfalls along the nearby escarpment, make for a fantastic adventure, you must see 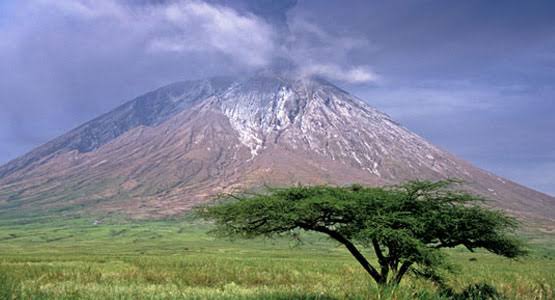 3 Days tour of the Lake Natron with Ol Doinyo Lengai Trek Arusha/Karatu – Lake Natron
After breakfast in Arusha, drive to Lake Natron. Meet an ancient, traditional African way of life. The journey is worth the effort to experience true rural Africa. Lake Natron is also famed for its flamingo population. Although wildlife may be seen in this area, this location is not about game viewing; rather it is about experiencing the breathtaking waterfalls and the beautiful lake Natron also unforgettable sunrise experience. Black rhino tours recommend dinner and overnight at Lake Natron Moivaro Lodge

Day 2. Mountain Oldoinyo Lengai
You will climb Mount Oldonyo Lengai in the midnight. It will take you 5-7hrs up and down. Oldoinyo Lengai” means “The Mountain of God” in the Maasai language. The summit of this strato-volcano is 2962 metres above sea level, and affords direct views into the caldera of Tanzania’s only officially-certified active volcano, and the world’s only carbonatite volcano. Looking north from it’s summit crater, the hot barren salt flats of Lake Natron stretch into the distance. To the south stretch the crater Highlands and the Ngorongoro Game Reserve. The eastern horizons dominated by Kilimanjaro and to the west the forested escarpments and hills comprising the western slopes of the Rift Valley. It is possible to walk across the crater floor. The ascent of Oldoinyo Lengai is demanding on account of the day time heat, lack of water, steep and unsuitable slopes of ash and crumbly rocks and considerable height gain. Normally you can start ascending to summit early in the morning and reach to summit at sunrise. Short and a warm jacket are suitable for ascent, also long trousers are good as the summit before dawn can be cold. Access route from the North West allows an early descent to be made from the summit in the morning shadow.

Day 3- Natron to Arusha
6After breakfast drive to Arusha either for your flight back home or to your next destination.